This billboard is visually striking because of the high contrast between yellow and black. Having a billboard in a local Tennessee community is an good start on helping all citizens talk about preventing opioid overdose. Marketing theory suggests that an advertisement must be seen about 7 times before it starts to register with the intended target audience. Consider one billboard as one of seven needed messages to "reach" the customer. 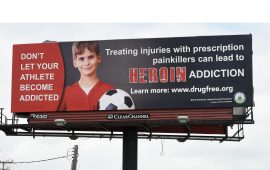 Erect a Billboard in Your Community
Read More